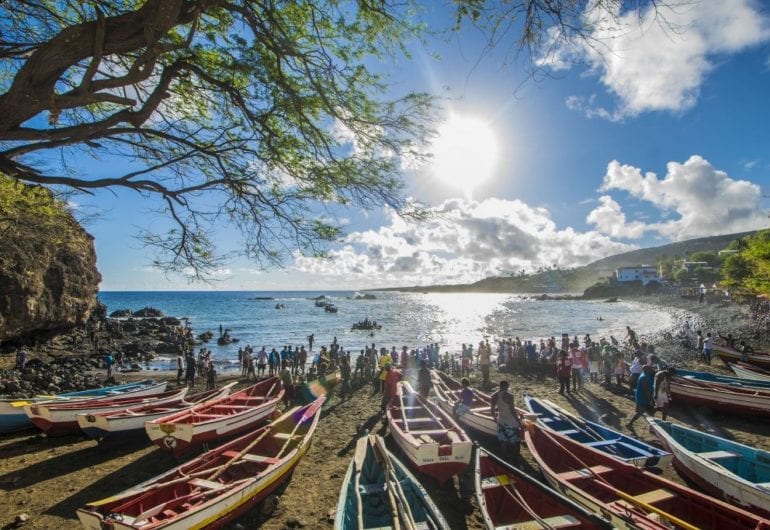 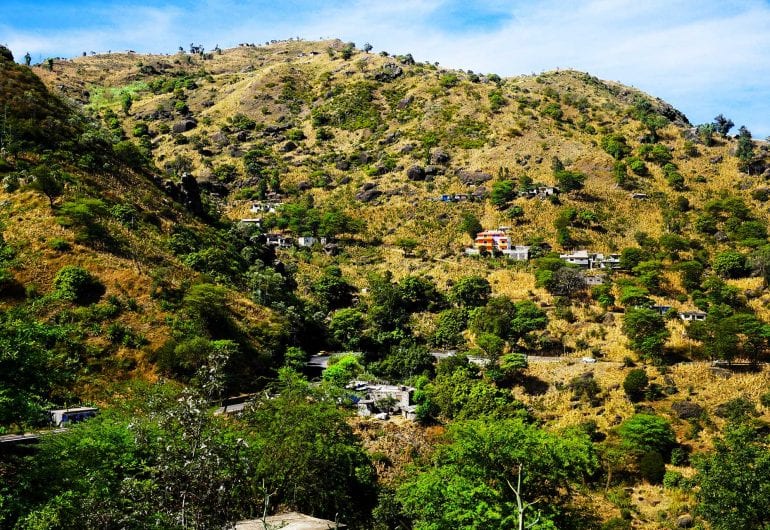 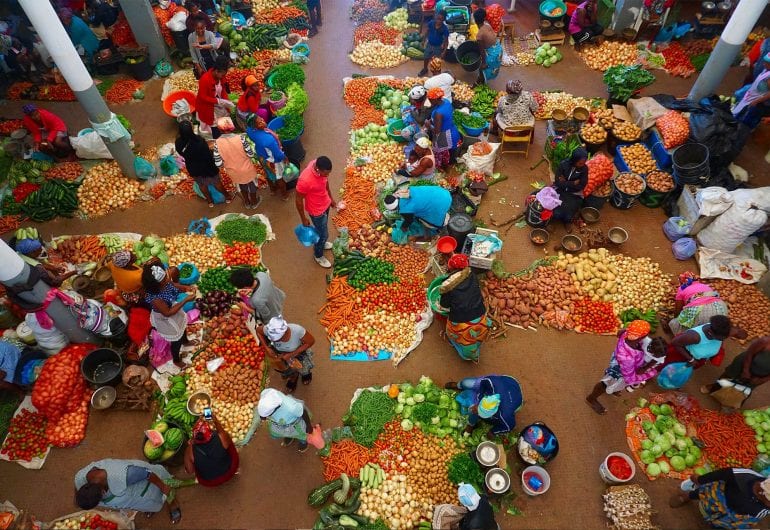 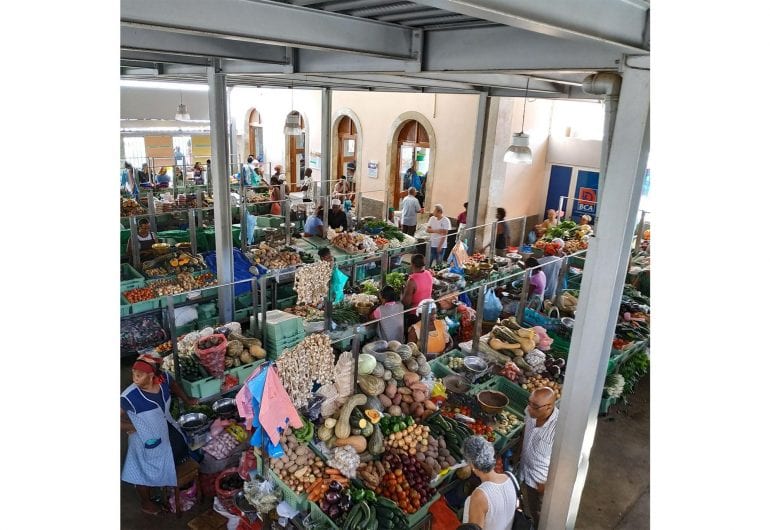 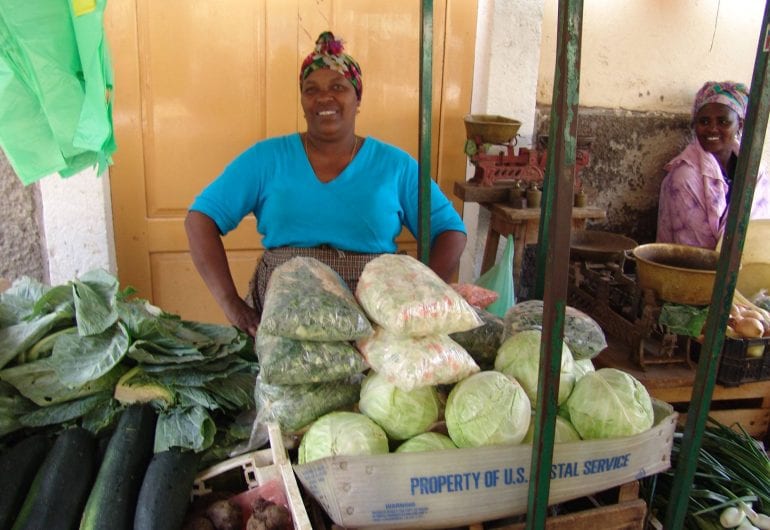 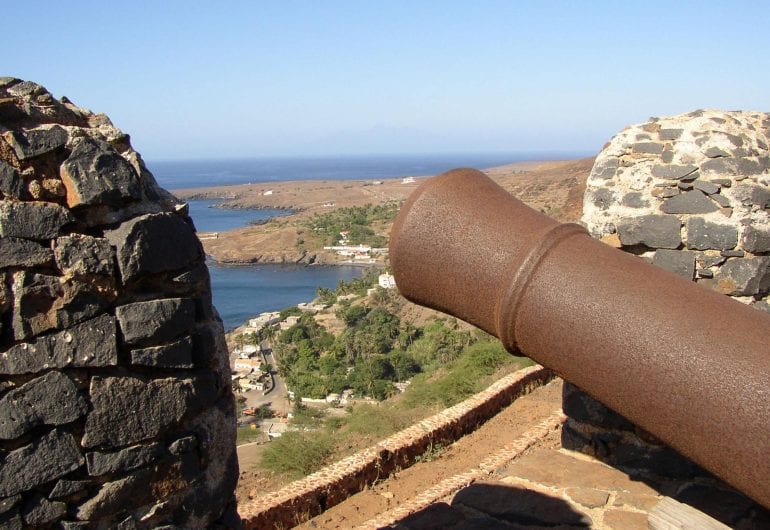 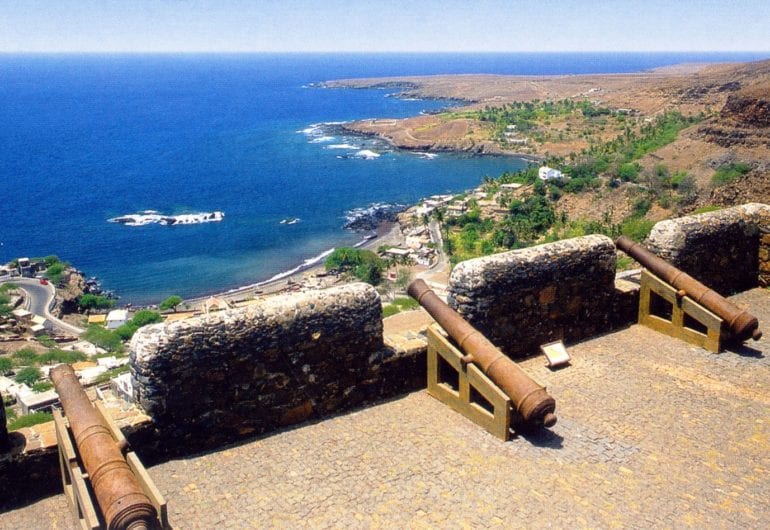 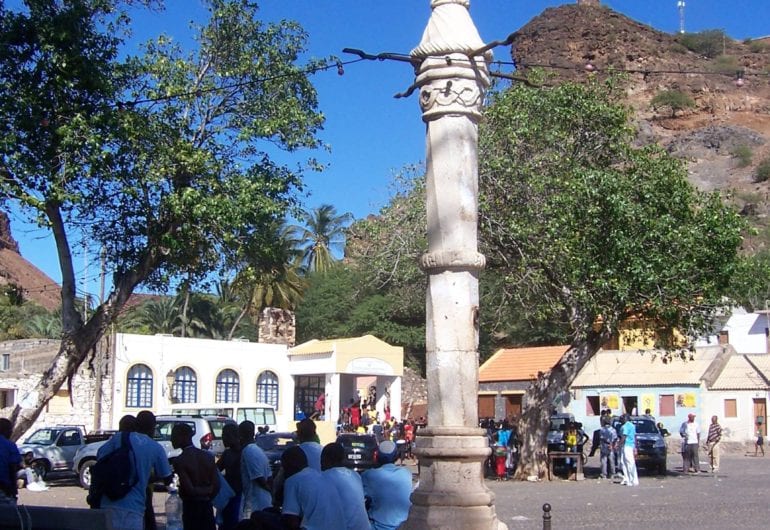 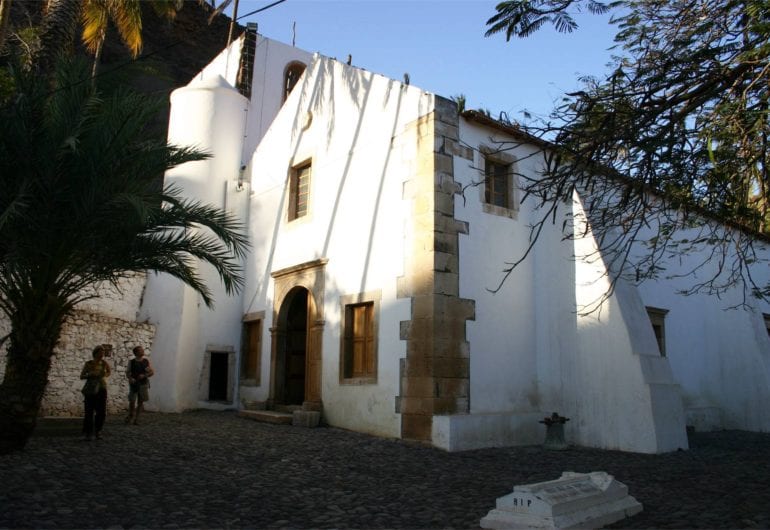 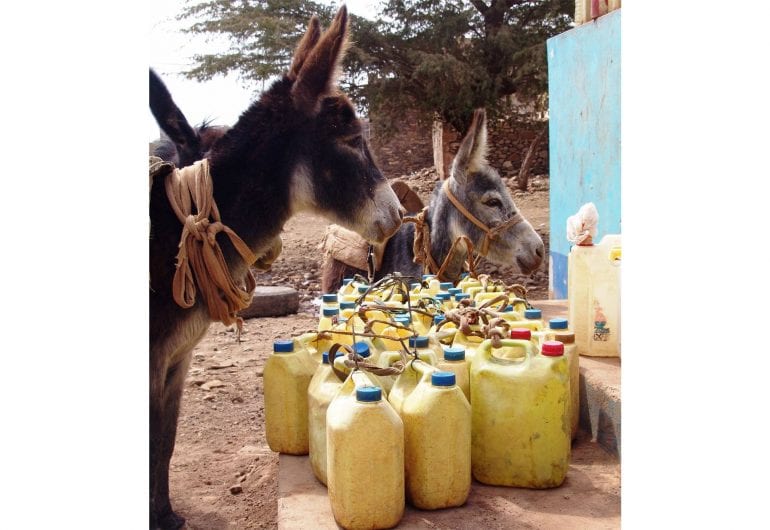 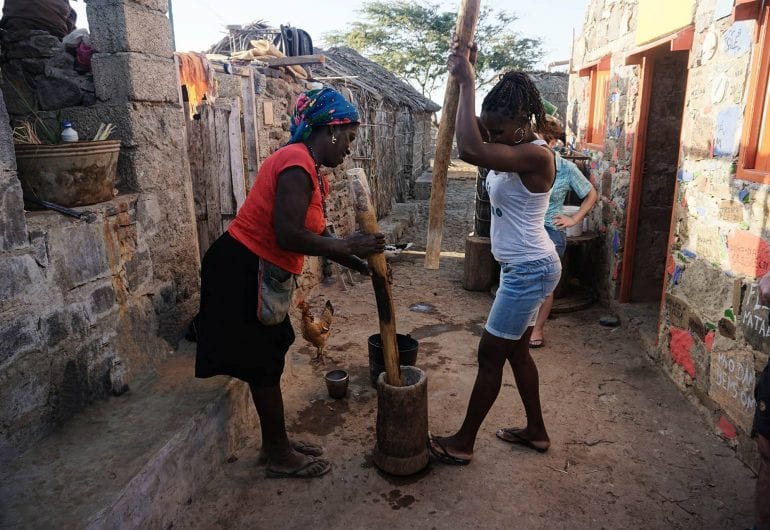 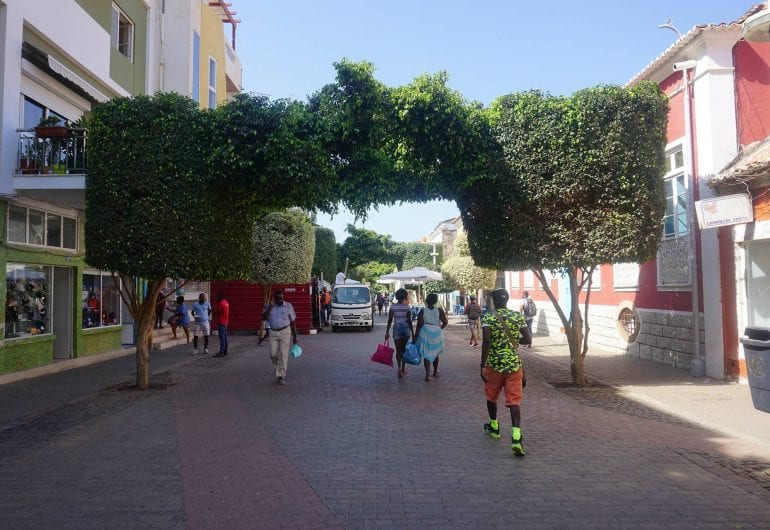 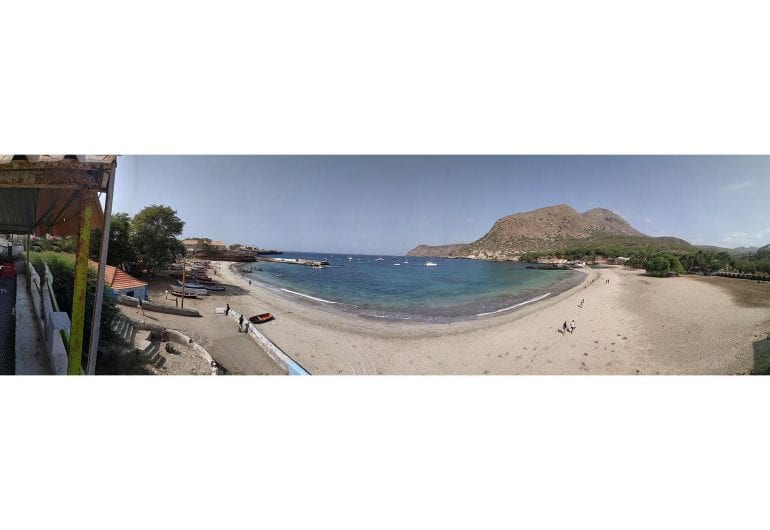 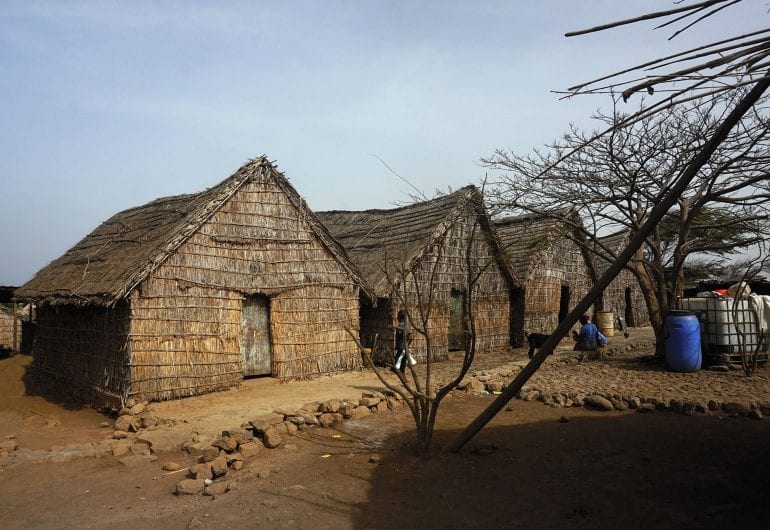 Santiago is the largest and most populated Cape Verde island. It has very valuable natural ecological and landscape resources, combining picturesque coastal and desert panoramas with cultivated valleys and inland zones. The traditional festivals and day-to-day atmosphere of the whole island makes Santiago the most African of all the islands of the archipelago.

The round-the-island tour takes a whole day – but it is a fascinating experience. São Jorge dos Órgãos, Assomada with its interesting fruit market, Chão Bom – where you can see the old prison that has been transformed into a museum – and Baia do Tarrafal, are obligatory stops on this trip.

The immense plantations of banana and coconut trees that stretch as far as the eye can see are also very impressive, and the visitor can enjoy the water of a coconut, freshly picked and opened for the occasion.
Cidade da Praia, Cape Verde capital and home of the Government has expanded greatly in recent years through diplomatic missions and international organisations and offers the visitor an atmosphere that is full of happiness and contrasts. It is worth making time to visit this fascinating town, with residential areas of relatively well conserved colonial architecture and large expanses of uncontrolled urban growth, from the Sucupira Market where one can buy and sell everything, to the Plateau fruit and vegetable market, part of the town where the public services and commerce are to be found.

A visit to Cidade Velha is an absolute must when in Santiago. It was the first capital of the Cape Verde islands and the first European centre to be built in the tropics. The old Ribeira Grande de Santiago is the cradle of Cape Verde culture and a living memory to the past. This is a visit of very high cultural interest.
Some of the original street layout remains impressive including two churches, a royal fortress and Pillory Square with its ornate 16th century marble pillar.
Cidade Velha has been inscribed on UNESCO’s World Heritage List in June 2009, marking Cape Verde’s entry to the international community’s inventory of properties of outstanding universal value.

São Tiago is the largest island in Cape Verde, the most populous and productive. It has an area of 991 km2, with a population of approximately less than 240,000 inhabitants.

The city of Praia, on the island of Santiago, is the capital of Cape Verde. It was elevated to such a category in 1858, a rising and historic city with about 42 thousand inhabitants. Santiago is about 640 km from the West African Coast. It is located on the Sotavento side, is 75 km long, north-south, and about 35 km wide, east-west, the highest point on the island is Pico de Antónia, with about 1392 meters.
It is about 50 km from Fogo island, on the west side, and 25 km from the neighboring island of Maio, to the east.

Like all the islands of Cape Verde, the island of Santiago has had periods of great difficulties and great suffering, the majority of the people, practically had no freedom, only followed orders dictated by the colonizers and human traffickers.

According to historians, in 1775, there was a horrible famine, killing many people, according to some estimates, of a population of about 25,000 inhabitants, only less than 12,000 survived, which shows the calamity that hovered on this island in those ill-fated times.

The island of Santiago is currently undergoing major transformations, in almost all aspects, with the creation of infrastructures that will increasingly benefit its population and economy. For example, in recent times, the city of Praia already has an international airport, a teaching university, the construction of a port with modern and secure facilities is currently being contemplated, allowing more internal and external goods to be transported. In the interior of the island, a dam was built for the first time in Cape Verde, where it will benefit a good portion of the population, taking advantage of serving as a defense against other intruders who sailed these seas or places.

The installation of the first human community on the island of Santiago, had to face great difficulties, from food plants, domestic fauna, construction materials, as well as the adaptation to an island space with great lack of soil and water. Almost everything had to be introduced by the first settlers: seeds, cattle, agricultural implements, wood, roofing tiles for houses, even stonework stones were brought from Portugal, effectively the construction techniques of Portugal as well as the usual ones on the neighboring African coast they had to be adapted to the environment of the island of Santiago, where clay, masonry stones, wood and mulch were missing. In the first phase of settlement, the island of Santiago based its economy on trade with the coast of Guinea, where slavery had a notable role. In this scenario of port and commercial economics, the Sahelian environment, with the drought cycles, was little felt due to the predominance of trade.

However, the domestic economy, turned to agriculture and livestock, had to import plants and animals, with an evident impact on the alteration of the island’s flora and fauna. The first settlers had to test a great diversity of cultures in the island’s unknown ecosystem, plants from Portugal, West Africa, the Indies and the Americas. The dry tropical climate, with rains concentrated in the summer, was unknown to the settlers from Mediterranean Portugal, with winter rains and droughts in the summer. The usual plants such as wheat, vineyards and olive trees found it difficult to flourish on the island of Santiago. The plants known to Africans brought to the island as rice (Oriza glaberrima), did not support the arid climate of the island. It is practically from the 16th century with the arrival in the Americas that agriculture on the island of Santiago diversified with the introduction of American agricultural plants that progressively dominate in the fields of the island of Santiago..

The island of Santiago is the largest in the archipelago of Cape Verde, it was also the island where the population of the archipelago began in the 15th century, during the period of European expansion led by the Portuguese crown. Starting from a sui generis natural landscape at the crossroads between Macaronesia and the Sahel, the human presence initiated with the settlement introduced profound changes in flora and fauna.

The settlement process with the transformation of the island into a revolving plate in the triangular trade between Europe, Africa and the Americas was reflected in the genesis of a new culture by the crossing of peoples and cultures from Mediterranean Europe and West Africa, but in parallel the island’s ecosystems were modified by the introduction of plants and animals from different origins that were acclimatized before reaching their final destinations .

Over five centuries of human presence, an island that was once deserted and in a fragile balance has been completely altered with the creation of a highly culturalized landscape where man seeks a balance between weak natural resources and a viable economy capable of promoting sustainable and durable development.
Cape Verdean has consolidated in its originality and expanded through successive islands in the archipelago populated over time between the 16th and 19th centuries. The island of Santa Luzia is still deserted, despite being economically inserted into the fishing grounds of the neighboring islands. One of the characteristics of the Cape Verdean nation is its extensive diaspora resulting from emigration throughout history, which started in the late 18th century and continues today, however there is a great internal cohesion in its identity both in the archipelago and abroad, being the Creole language. Music is an important element of the Cape Verdean brand in all host countries.

The insertion of the island of Santiago and the archipelago of Cape Verde in a world in globalization on the threshold of the third millennium has been transforming the islands into an important destination The Island of Santiago (Cape Verde) as a tourist destination and the crossroads of cultural patterns from the vast Cape Verdean diaspora resident abroad as well as the large thousands of visitors who annually visit the islands. Despite its location so close to West Africa and its political insertion in ECOWAS, the archipelago managed to maintain its originality as a place where cultures and ideas crossed.

Pope John Paul II was the first Pope in history to visit Cape Verde and the city of Praia.