THE SUNDAY TIMES TRAVEL MAGAZINE – Cape Verde: ‘It feels as though everything here is music’

CAPE VERDE: ‘IT FEELS AS THOUGH EVERYTHING HERE IS MUSIC’ 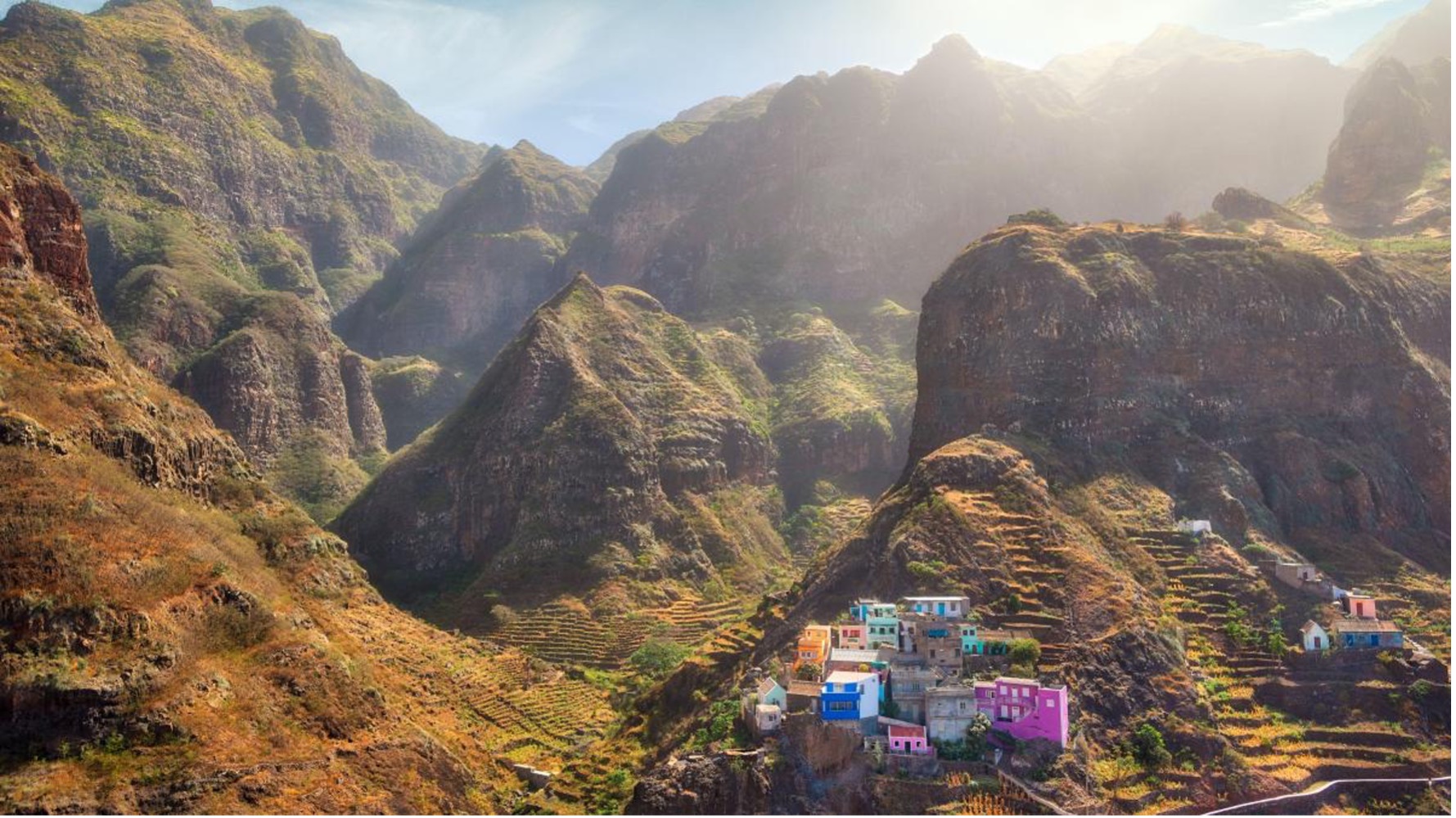 High on a blustery mountain top in Sao Vicente, I’m sipping tea brewed from clouds and anise. It is a typically Cape Verdean marriage of the practical and the poetic. Miguel, the Cabana de Cha’s modest proprietor, ascends some 700m on foot daily to harvest mist and distil it with botanicals into fragrant tea and liquor.

I’m midway through a week exploring three of the ten scattered volcanic islands that form the Cape Verde archipelago off Africa’s west coast. I was drawn to the Cape Verdes by their variety. Utterly undecided on what kind of holiday I needed — slothful sun and sand, active adventure or cultural battery-charging — these intriguing Atlantic islands seem to offer it all.

I’m not sure if it’s the tea, the altitude or the perfect weather but I feel invigorated. The wind is singing and the trees dance along. Edson Oliveira is my guide to Sao Vicente. He’s an accomplished musician and offers his theory that perhaps it is this natural soundscape that inspired Cape Verde’s rich musical heritage. 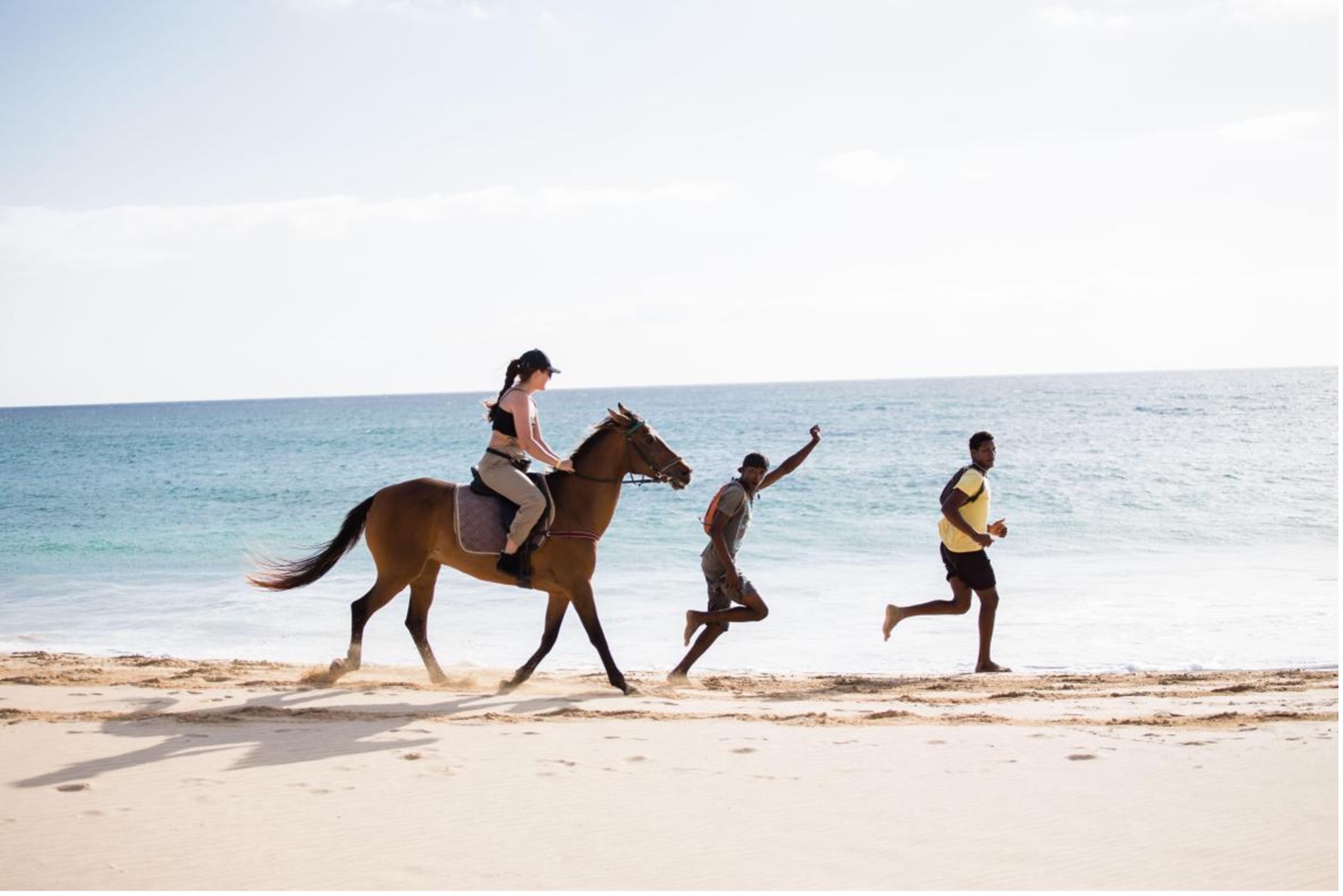 Sao Vicente is generally accepted as the cultural heart of the Cape Verde islands and Mindelo, its capital city, vibrates with life. Weathered Portuguese colonial-era architecture lines the busy port. I wander the streets at dusk debating where to have dinner. I double-take as I pass a giant disembodied head in a courtyard, a pre-Covid carnival relic. The pandemic took a heavy toll but aid from the million-strong Cape Verdean diaspora helped the islanders to survive. More Cape Verdeans live away from the islands than on them.

Stories of generations lost to drought, emigration and the sea are among the melancholic themes of morna — a form of music and dance made famous by Cesaria Evora. Murals and dedications to the Barefoot Diva, as she was known, appear round every corner. Edson and I watch the sunset paint the harbour violet and decide to eat at the marina where his friends are playing. I feast on freshly caught amberjack and a tart white wine from Fogo island. Various singers join the band, who segue seamlessly between spirited accordion-based funana and reggae. Edson delivers a devastating morna to the night sky.

We move on to a small jazz club where the band play outside on the street. The mood is mellow and welcoming. Locals on their way home from work stop to listen; one man dances on the road, indifferent to the traffic. Creole chatter and ambient street sounds somehow enhance the songs — it feels as though everything here is music. I want to stay all night but thoughts of an early ferry in the morning have me tucked up by 10pm.

Crossing from Mindelo to Porto Novo at dawn the next day the engines judder and buck in the swell, a clear reminder that we are in the untamed Atlantic. On the bow deck, spray salts my eyes but I cannot tear myself away from the bewitching view as we depart. Sunlight pierces the overcast heavens focusing a seemingly divine spotlight on Mindelo Bay. I’m so mesmerised by what’s behind us I very nearly miss the view ahead. Santo Antao rises out of the ocean in towering lizard-back crags. Clouds snagged on the peaks sit uncannily still, shrouding the summit from view. 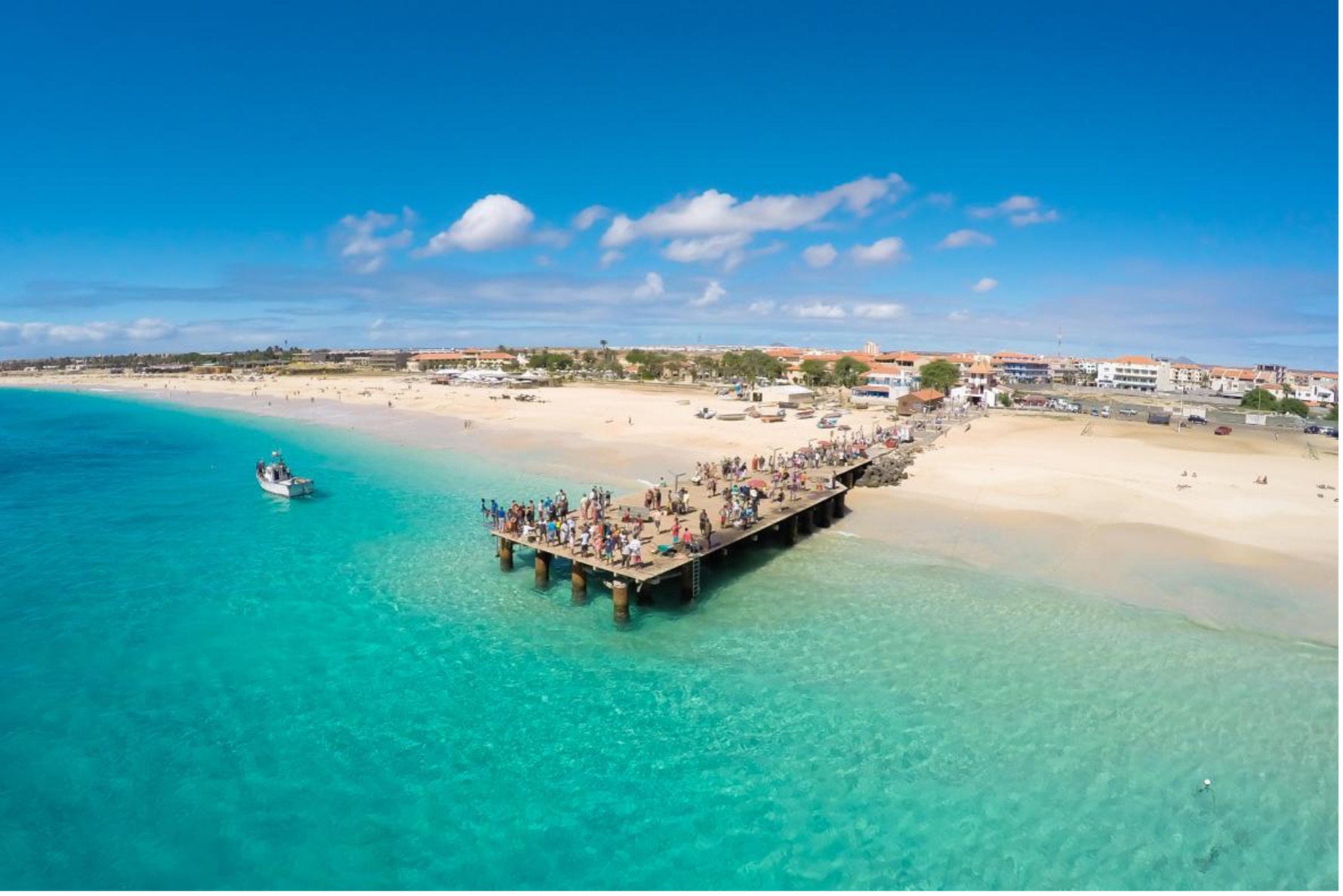 The beach at Santa Maria on the island of Sal
ALAMY

Although the islands that I visit share certain flavours, each has a distinctive character — so it feels as though I’m having three quite different trips. If Sao Vicente is the artist of the archipelago then Santo Antao is the gardener. While much of Cape Verde’s terrain is arid and depopulated, Santo Antao is an explosion of wild figs, palms and dragon trees. 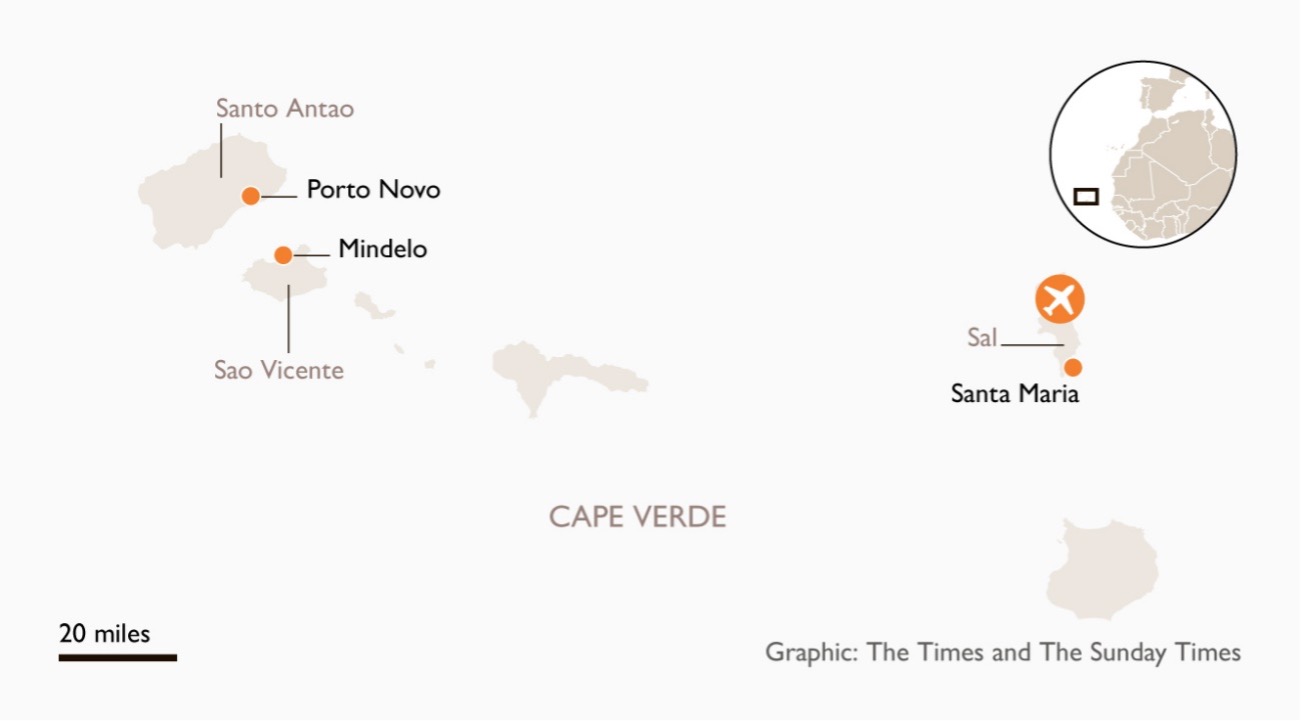 In Porto Novo I jump into the open back of an aluguer, a shared pick-up truck, for a tour of the island with the resident guide Odair Gomes. We wind sluggishly up the cobbled Old Road. These epic mountain routes show Cape Verdean tenacity writ large, painstakingly constructed over decades with little more than grit and pickaxes. Likewise the epic terraces scored into sheer basalt gorges seem to defy physics.

We ascend into a microclimate of dense fog, stopping briefly to pile on layers and inhale a bitter jolt of coffee in the Planalto Leste Forest. Red iron-rich earth and proud conifers edge the road. The air is suffused with aromatic mimosa blooms. I squint at what appears to be a hay bundle with legs ambling out of the mist. Besides the odd tourist-laden aluguer and a few hikers — really, the best way to see the island is on foot — these over-freighted donkeys are the only other traffic on the road. 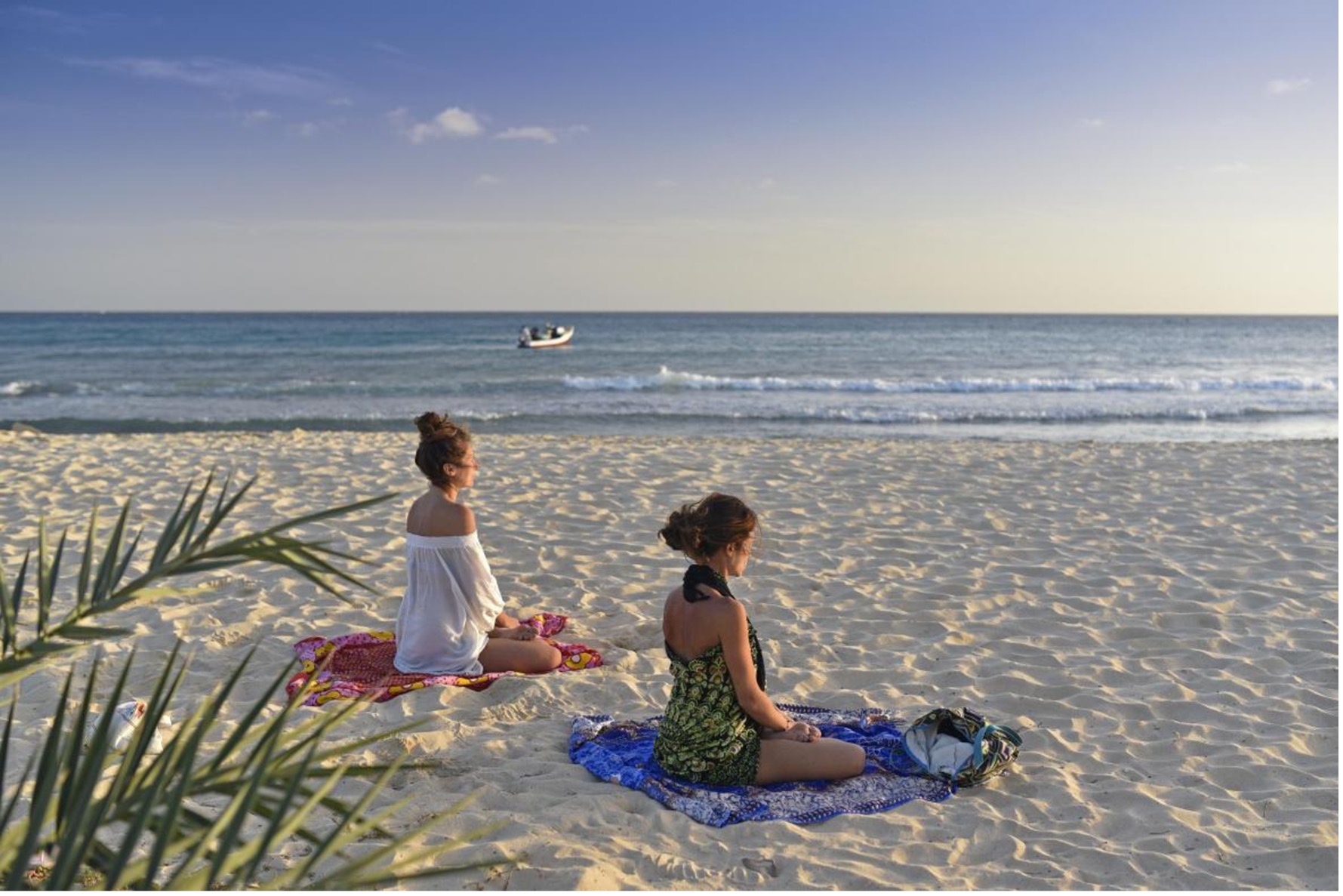 We continue our giddying journey through the Ribeira Valleys, past the fairytale Fontainhas village — the view of this sky-kissing cluster of homes is said by National Geographic to be one of the most beautiful in the world. I watch as a tourist nearly eliminates himself from the gene pool trying to capture it in a selfie on the cliff’s edge.

We turn off-road into what looks like a ditch but leads us to an airy veranda restaurant. A bracing shot of grogue, the ubiquitous local sugar-cane liquor, and homemade goat’s cheese are followed by crisp hibiscus juice and flavourful pork stew. Entertainment is provided by a delinquent sparrow trying to thieve a yam twice his size.

I spend the night at Pedracin Village, a picturesque retreat in the northern Ribeira Grande Valley. At dusk the dusty Saharan winds create an ochre glow rendering all the scenery unreal, as if in an antique sepia photo. The wind growls and whistles around my room, conducting an orchestra of trees outside my window. 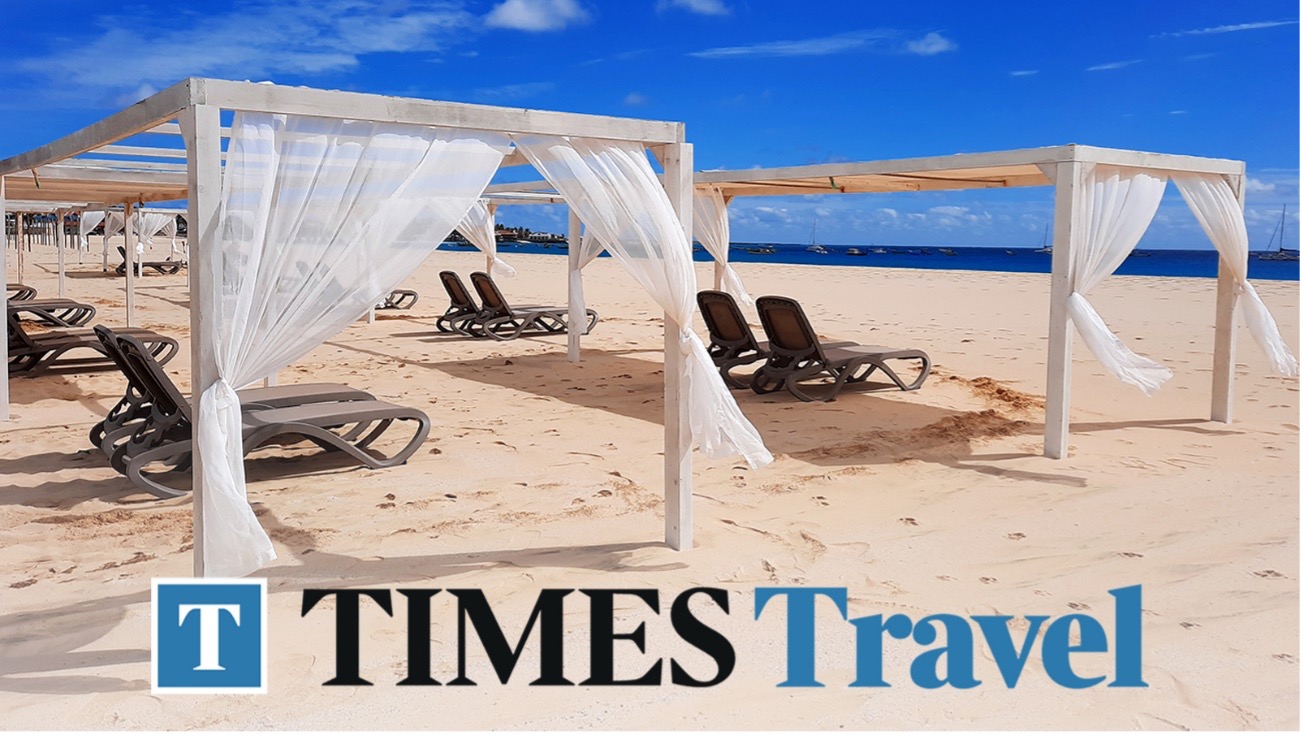 The next day Odair collects me in another aluguer and we head south, across scorched desert. Goat enclosures pepper the hills and faded pink aloe plants thrust their serrated tentacles up out of the ground like petrified sea creatures. I can just about make out Sao Vicente in the distance, almost indiscernible from the sea. The wind whips through my hair as we chicane down to sea level. Fortified by another grogue stop we explore Tarrafal’s volcanic black beach glittering like coal dust, offset by roiling white seas.

My time in Santo Antao is exhilarating. I feel as though I’ve crossed whole continents, but after two days rattling around in the back of a truck I am ready for the lazy beach holiday bit of my trip. Sal is the most developed of the islands in terms of tourism and you can reliably find long, empty tracts of blond-sand beach. I try to stay put and soak up the sun but feel so energised by the previous adventures I can’t sit still.

I take an early morning stroll around the main town of Santa Maria. Exuberantly coloured houses and scrappy grey breezeblocks sit side by side. Explosions of magenta bougainvillea thatch the occasional roof. Dogs are everywhere, draped inert on the street, as if melted by Salvador Dalí. The town pier fizzes with industry. Fishermen unload their catch and women crouch over baskets to clean the fish, the scales sequinning their arms. 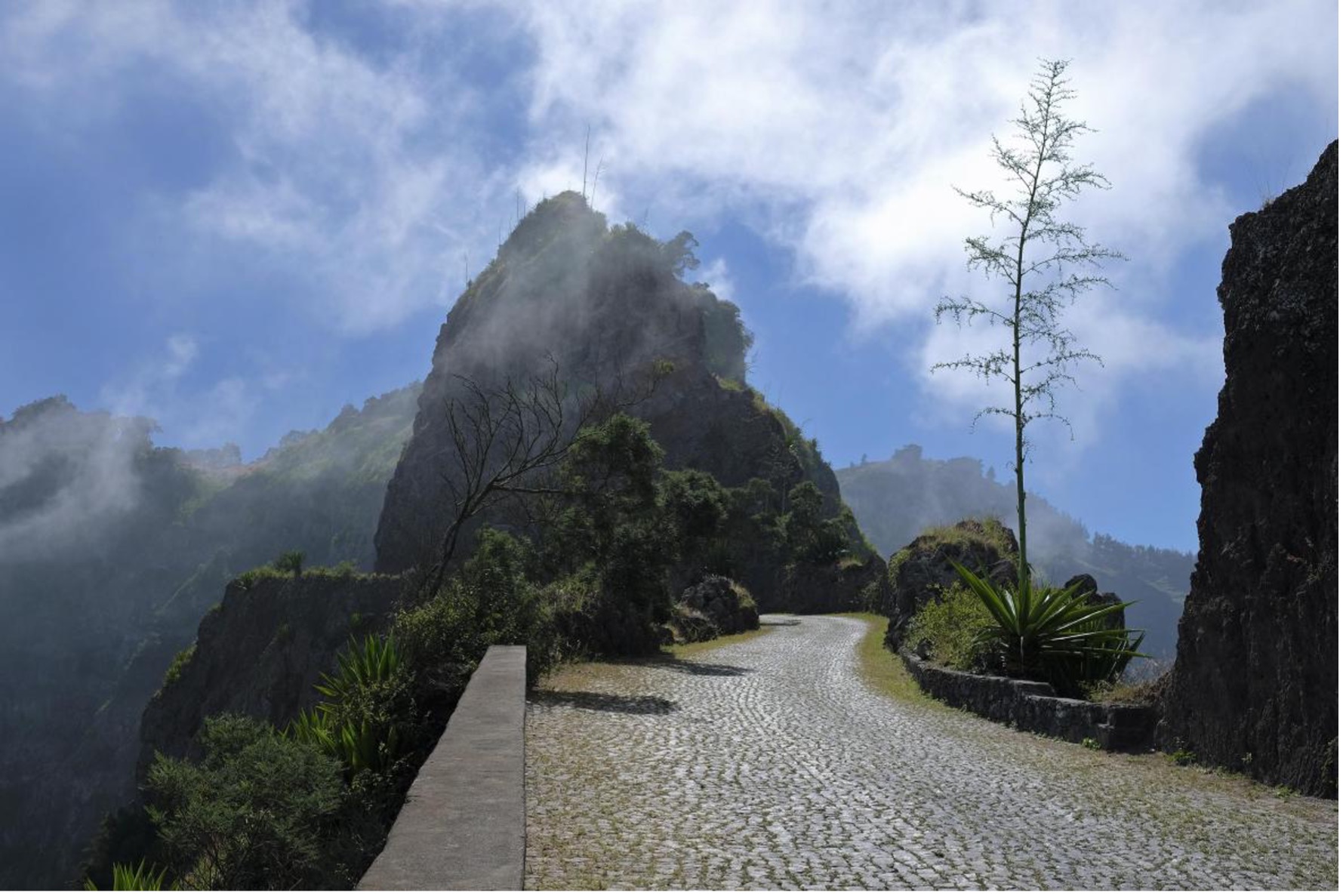 I paddle with lemon shark pups on Shark Bay and float in the saline craters of Pedra de Lume. The minerals are supposed to take ten years off you so if I come every day for the next three days I wonder . . . but apparently it doesn’t work like that. Still I want to see more.

My experience of horses extends only to knowing which is the bitey end; nonetheless I decide a ride will be a great way to say goodbye to the island. Arriving at the stables I am surrounded by lofty Scandinavian equestrians all champing at the bit to gallop down the beach. I am the lone novice. My sedate white rescue horse Ufa saunters along as the others tear off into the distance. I can’t speak for Ufa but I’m perfectly happy swaying across the dunes taking in the view. We pass desiccated acacia trees reaching out in a seeming state of longing and crystalline salt flats that mirror the sky. I spend half the ride plotting my return, to explore the grand dunes of Boa Vista island, snorkel with loggerhead turtles and hike the craters of Fogo. Three iThree islands down, seven to go.

Jenni Doggett was a guest of Cape Verde Experience, which has seven nights’ B&B between the islands of Sal, Sao Vicente and Santo Antao from £1,549pp, including flights, ferries and transfers (capeverde.co.uk). Travellers must register at ease.gov.cv, complete an international travel form at igrp.gov.cv and, if not fully vaccinated, must show a certificate of recovery no more than 90 days old or a negative PCR or lateral-flow test from within 72 or 48 hours of departure respectively. Under 13s are exempt.

Africa’s treasured islands: Cheaper than the Caribbean and warmer than the Canaries – Cape Verde is a winner for winter sun adventures

0
Everyone here is beautiful. The women, eyeing the men, sashay slimly by in their tight-cut dresses, their thick coils of ringlets piled high. The men, 6ft plus, dignified, long-legged, with ...
View more 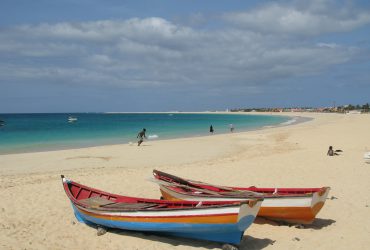 0
Liz Edwards, commissioning editor at the Sunday Times Travel has commissioned national freelance journalist Jenni Doggett, to write a 1200-word feature that will be published in print as soon as ...
View more 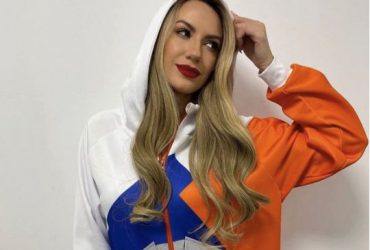